His Excellency added that the university is ranked first among Egyptian universities and among the top 500 universities in the world, according to the Times Higher Education classification, which is based on 13 carefully calibrated performance indicators by measuring the institution’s performance through teaching, scientific research, knowledge transfer, and international references.

Prof. Mohamed Abdulaziz Muhalal Orabi – Vice President of the University for Postgraduate Studies and Research and Supervisor of the University’s International Classification Office – explained that maintaining the summit is more difficult than reaching it, and this new achievement that is added to the balance of Aswan University’s practical and research achievements is the harvest and fruits of the efforts of the university administration Which was able to develop a plan for development despite the challenges over the past and current years in various fields and research, educational, academic and construction sectors, and the extent of the university’s relationship with the surrounding environment and its societal impact.

He also thanked and congratulated the researchers in particular and all the university’s affiliates for achieving this achievement, which indicates their global scientific standing and the quality of the plan set for the university’s progress. His Excellency explained that we are working to increase the motivation of researchers to provide their best to lead the university to its desired position globally, and he thanked the management of the classification team for their dedicated work in this regard.

His Excellency pointed out that Aswan University has recently obtained many scientific and research titles among international universities, which has earned it a good academic reputation among universities. The number of its faculties is 18, the Technical Institute of Nursing, the Institute of African Studies and the Nile Basin Countries, which the university administration is currently working on developing to the desired position to participate in the university’s achievements by returning it to the correct educational and research path and working on implementing the development program through updating new educational programs that keep pace with the market Work, and this comes within the framework of competition to reach the world and work to achieve advanced positions in the fields of international scientific research. 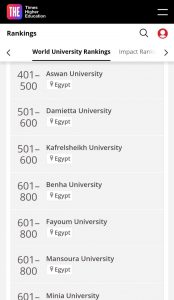